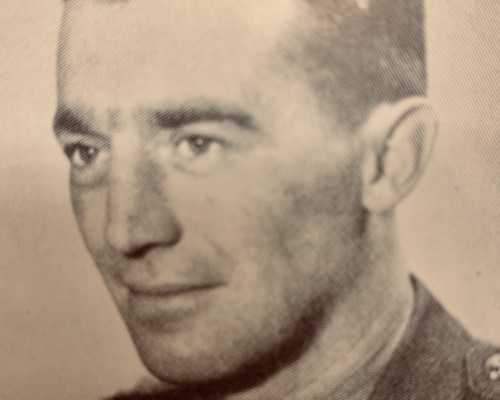 President of the Canadian Paraplegic Association, youthful, aggressive John Counsell, himself a paraplegic, looks forward with assurance to a bright future for the association. To John must go the lion’s share of the credit informing and organizing this Association which is expanding steadily and performing a valuable public service in aiding the rehabilitation of paralyzed Canadians.

Prior to the war, Counsell, a married man, anticipated a promising future in the brokerage business. When war broke out, he along with the many other thousands, enlisted in the Canadian Army. He served overseas with the Royal Hamilton Light Infantry, and when in 1942 the Dieppe raid gave Canadian regiments in England the first major crack at Jerry, John was among those who stormed the beaches. Things caught up with John Counsell that day, for he was cut down early in the action. Unable to move, and fully conscious, he lay for many hours among the wounded and the dying on the bullet-swept beach, watching the bursts of shrapnel. Finally, a brother officer dragged Counsell into one of the last boats to leave Dieppe, and he was taken to England. After a period of hospitalization there, he was sent to Canada, and at the Montreal Neurological Hospital, he underwent many operations at the hands of the skilled surgeons there in the vain effort to repair his shattered spine.

One would have expected that Counsell would have become resigned to the futile existence of a “shut-in”. Days and nights of utter monotony loomed ahead, and it was not long before he rebelled. At the very first opportunity, he procured his discharge from the hospital, and at the home of his sister, he began his long fight back to a reasonable state of mobility and usefulness.

The work of rehabilitation is tedious and discouraging. We who have been over the jumps also can realize the tremendous drive, courage and initiative which it must have taken for John Counsell to achieve the degree of mobility which he acquired in those early days before the Department of Veteran Affairs put into effect the re-training program.

Spurred by his own success in dealing with the many distressing aspects of paraplegia, Counsell determined that other war casualties similarly disabled, should be given the chance to live again. He was largely instrumental in obtaining Everest & Jennings collapsible wheelchairs for these cases, and when neurosurgeons returning from service in England, recommended that a separate centre be set up for the treatment of war paraplegics, Counsell lent his active support to the project. Early in 1945, the Department of Veterans Affairs opened Lyndhurst Lodge, the first centre of its kind in Canada.

It is hardly necessary to point out that the results obtained at Lyndhurst Lodge have been outstanding. More than half of the patients already treated have left the Lodge, end of this group many are profitably employed. The movement spread quickly and similar retraining centres are now operating at Ste Anne de Bellevue, Quebec, Deer Lodge, Manitoba and Shaughnessy Hospital, Vancouver. Much valuable work is being done at all of these centres in reclaiming the lives of those who, at the close of the first world war, would have been considered hopeless invalids for whom an early death was a foregone conclusion and a mere matter of time.

Not content with all that he had achieved, John Counsell and a group of other paraplegics who were similarly imbued with the courage of their convictions, formed the Canadian Paraplegic Association. The Association was incorporated in May 1945, and based on the principle that paraplegics could be made to lead useful, reasonably normal lives. The aims of the Association are to give aid to all men and women disabled by paraplegia, to obtain their mutual aid and protection, to foster and assist their vocation and professional training, to aid in procuring employment, and to investigate and promote the study of paraplegia.

Close cooperation with the Department of Veteran Affairs in presenting the problems of an entirely new set of veterans has resulted in the continuance of fine work at the retraining centres already mentioned, and a further result has been the rapid growth of the Association itself. Since its incorporation, divisions have been opened in Quebec, Manitoba and a division in British Columbia is taking shape. Its continued expansion seems assured, for the Association is not confining itself to the problems of the paralyzed veterans. Much valuable work is being done in the field of civilian paraplegics, although in discussing the treatment of these cases John Counsell claims that “we have only scratched the surface”. Through the Association, wheelchairs are being obtained for needy civilians, and largely due to the interest of the Association in the matter, the facilities of veterans’ retraining centres are now being made available to civilian paraplegics.

A man who “has been there himself”, John Counsell knows and understands thoroughly the main problems which confront the paraplegic. He knows the despair which accompanies each new setback, and he realizes the tremendous physical and psychological adjustments which the paraplegic must make before he can mingle in society freely and without fear or embarrassment. The Association which he heads is proving, again and again, its great humanitarian worth as whole new vistas of living are opened up for those who might otherwise eke out their existence as mere fragments of human beings, ignorant of the fact that life has not ended for them.